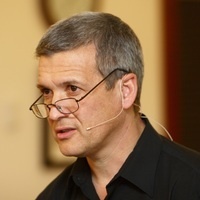 Keynote Presentation by Carl Wilkens: Help Build a Peaceful World by Seeing the "Other" as Yourself

All are welcome to attend Carl Wilkens' keynote presentation Help Build a Peaceful World by Seeing the "Other" as Yourself.

Following Wilkens' talk, a reception and book signing will be held in the Atrium of Building 3 from 2:15 pm-3:15 pm.

Carl Wilkens is the former head of the Adventist Development and Relief Agency International in Rwanda.  In 1994, he was the only American who chose to remain in the country after the genocide began.  His choice to stay and try to help resulted in preventing the massacre of hundreds of children over the course of the genocide.

Wilkens was featured in Frontline’s "Ghosts of Rwanda" and "The Few Who Stayed: Defying Genocide," an American Radio Works documentary which aired on National Public Radio.  His story reminds us of the profound connection between history and the moral choices we face each day.  It also arms us with new insights in the fight against genocide  along with tools and inspiration for re-evaluating the relationships we are part of every day.

This event is being supported by
Shuffield Lowman Attorneys and Advisors