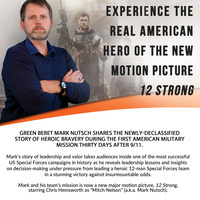 Join Valencia College students and staff to hear former Green Beret, Capt. Mark Nutsch, whose Special Forces unit was tapped to lead the first unit into Afghanistan in 2001 after the 9/11 terrorist attacks.

Nutsch was surprised to find their Afghan allies riding horses, rather than Jeeps or trucks. Undeterred, the Kansas farm boy (who'd ridden on the college rodeo team at Kansas State University) ordered saddles, saddle blankets and hay from the Pentagon and then taught his fellow soldiers to ride horses.

The story of his unit was later told in the movie, “12 Strong,” and in the book, “Horse Soldiers: A True Story of Modern War.”

Nutsch’s appearance at Valencia College was made possible through a grant from the National Endowment for the Humanities.

Light refreshments will be served.

Free and open to the public.

Light refreshments will be served.